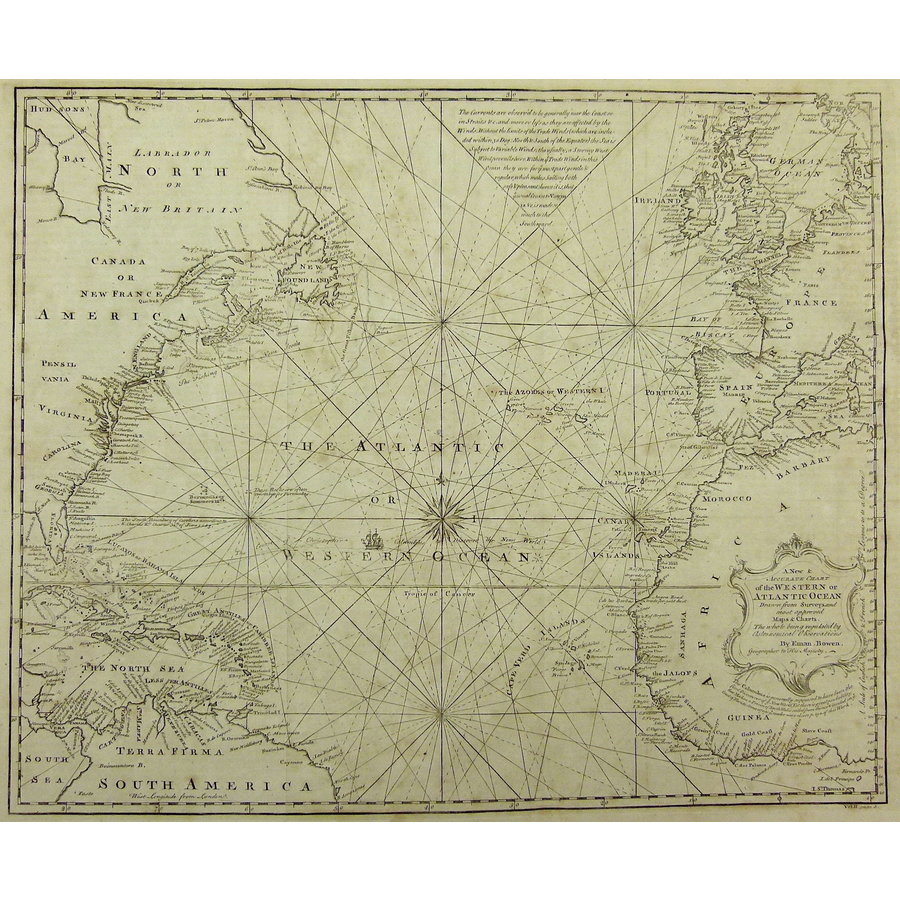 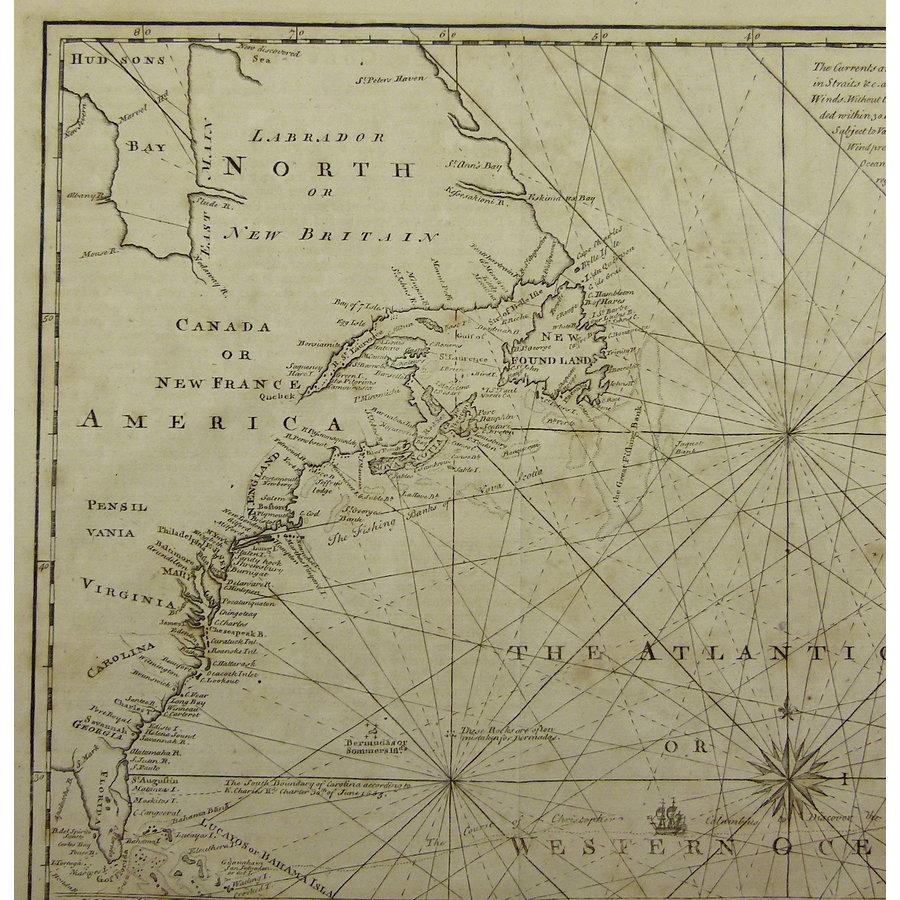 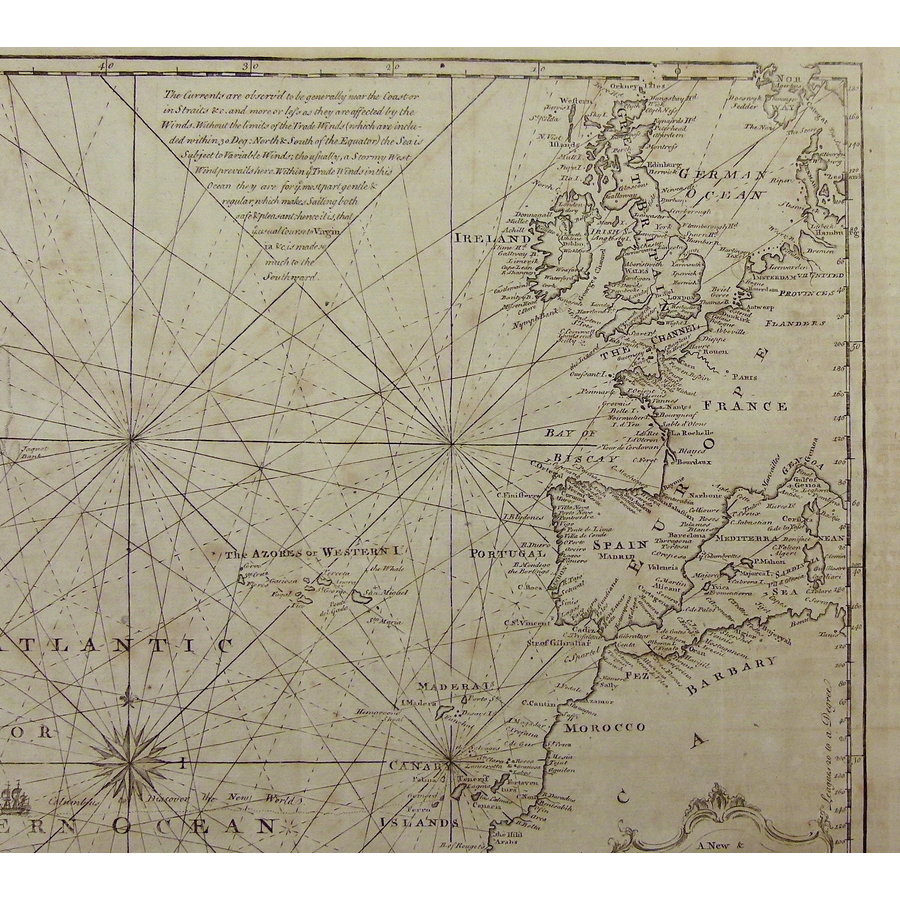 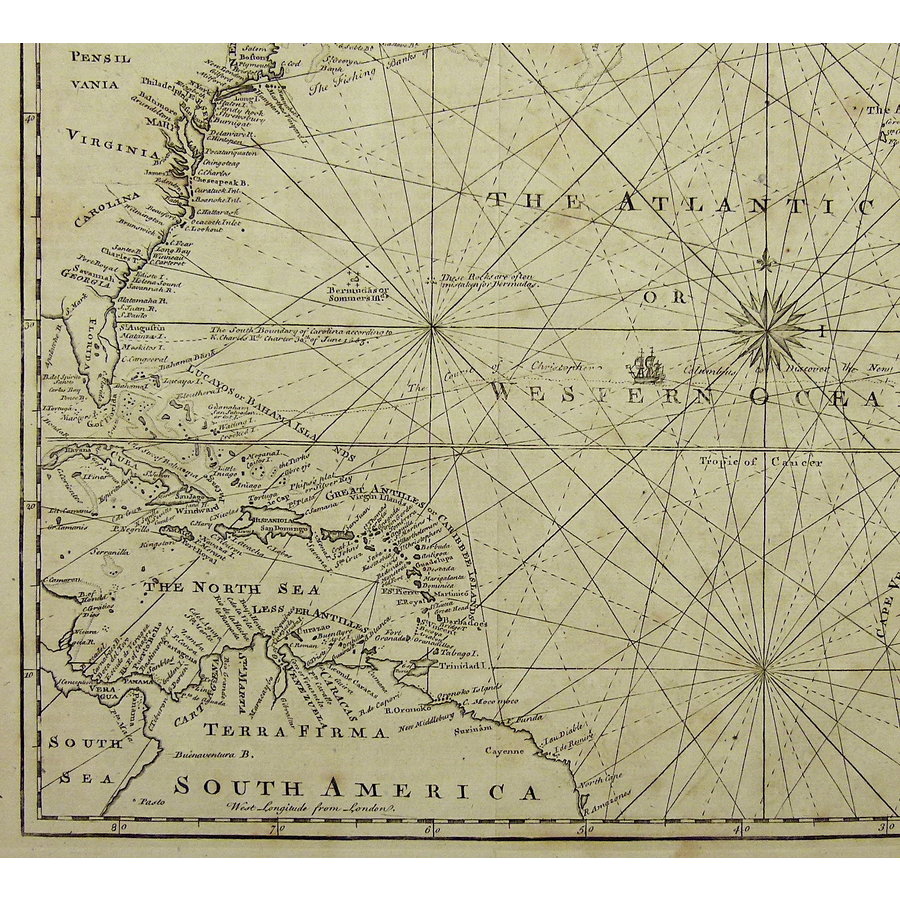 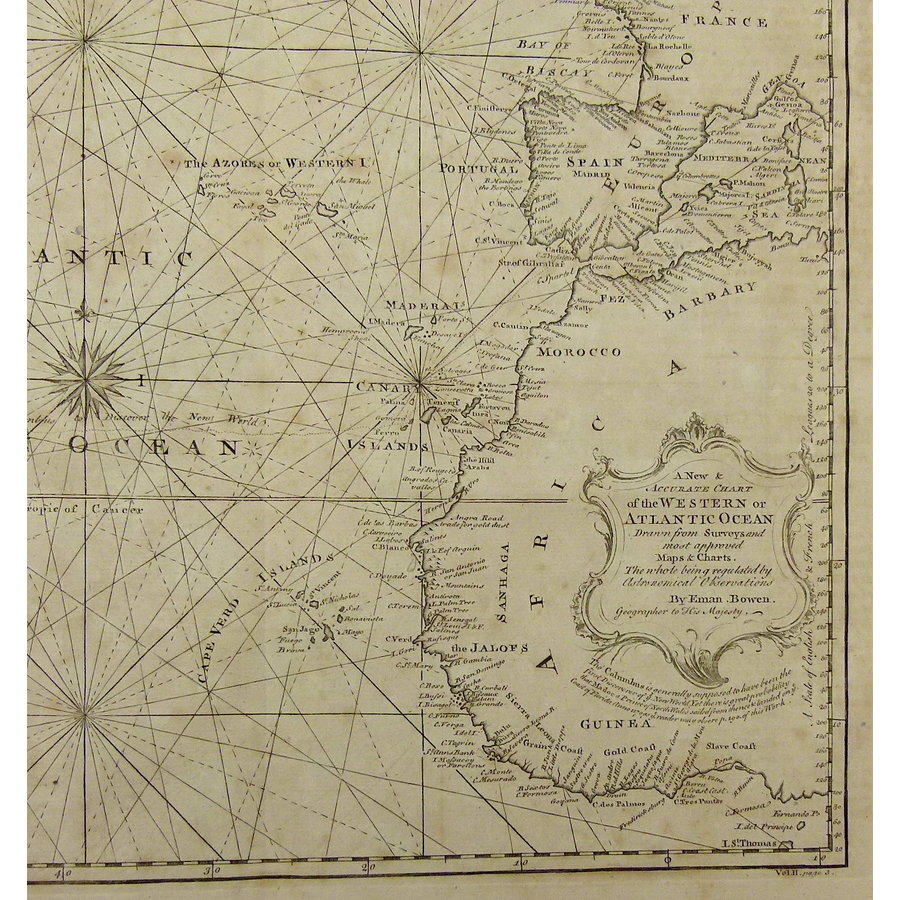 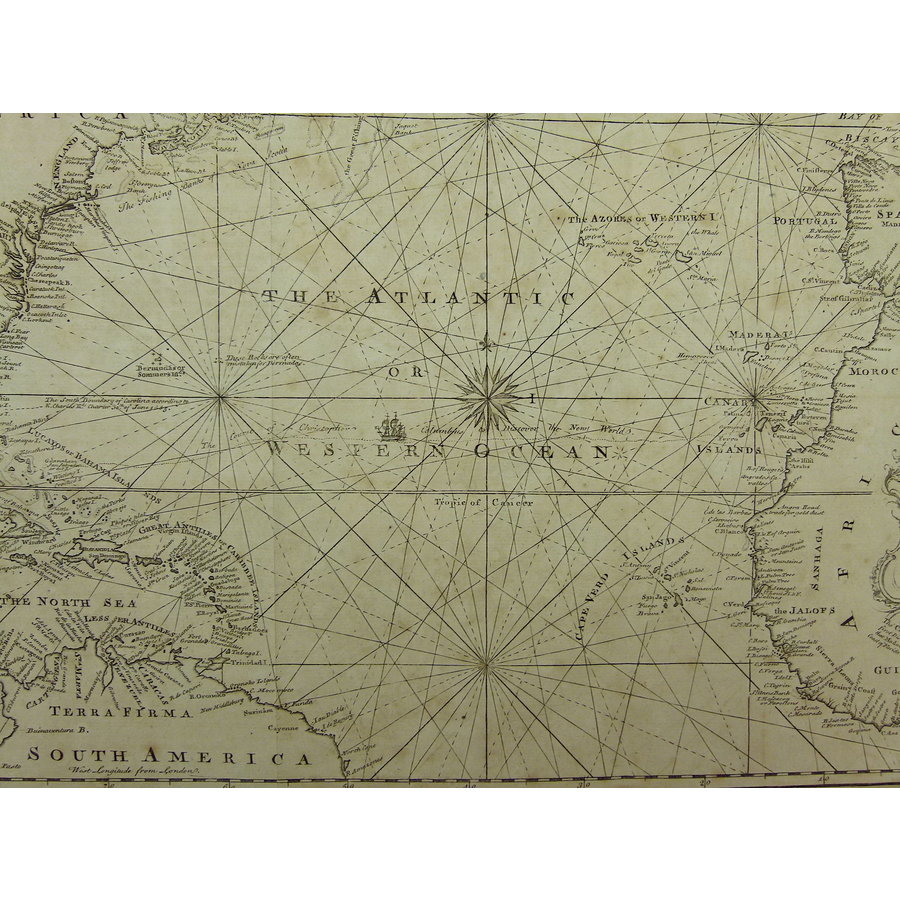 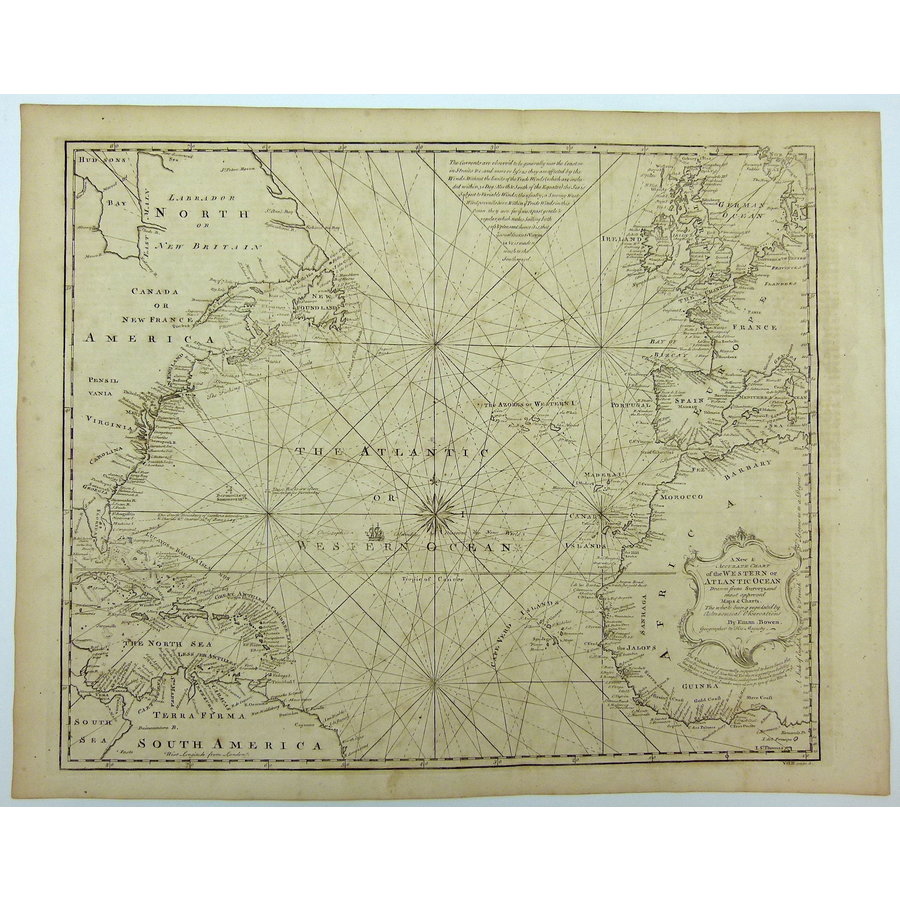 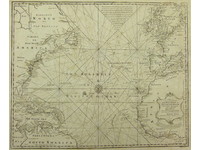 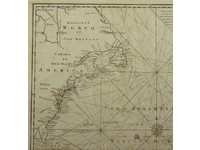 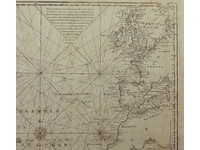 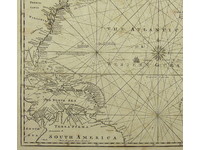 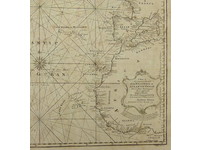 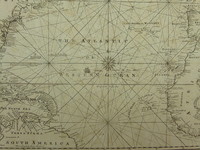 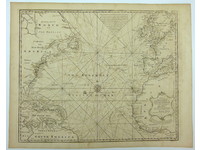 Gorgeous chart of the Atlantic and contiguous coastlines, showing the tracks of Columbus and numerous rhumblines.

The chart is prepared in the style of 15th and 16th Century Portolano charts, adding to its charm. An extensive note on the oceans currents at the top and notes on Columbus' voyage. Other annotations descrbe the South Boundary of Carolina per King Charles II's Chart of June 30, 1663.

The map also includes a lengthy note at the top center, which is an early reference to the Gulf Stream:

'The Currents are observ'd to be generally near the Coast or in Straits Yc. and more or less as they are affected by the Winds. Without the limits of the Trade Winds (which are included within 30 Deg.: North & South of the Equator) the Sea is Subject to Variable Winds; the usually Stormy West Wind prevails her. Within ye Trade Winds in this Ocean they are for ye most part gntle & regular which makes Sailing both safe & pleasant; hence it is that ye usual Course to Virginia &c. is made so much to the Southward.'

Perhaps the most interesting note is the reference below the title cartouche to the prospect that Prince Madoc of North Wales was the original discoverer of America. Madoc or Madog ab Owain Gwynedd was, according to folklore, a Welsh prince who sailed to America in 1170, over three hundred years before Christopher Columbus's voyage in 1492. Legend states that Madoc was a son of Owain Gwynedd who took to the sea to flee violence at home. The legend evidently evolved out of a medieval tradition about a Welsh hero's sea voyage, only allusions to which survive. The story thrived during the Elizabethan era, when English and Welsh writers made the claim that Madoc had come to the Americas as a ploy to assert prior discovery, and hence legal possession, of North America by the Kingdom of England.

The Madoc story remained popular in later centuries, and a later development asserted that Madoc's voyagers had intermarried with local Native Americans, and that their Welsh-speaking descendants still lived somewhere on the American frontier. These "Welsh Indians" were credited with the construction of a number of natural and man-made landmarks throughout the American Midwest, and a number of white travellers were inspired to go and look for them.

The annotation in the map suggests that Madoc had contact with the Coast of Florida and a section of Harris' Navigantum, in which this map appeared, is dedicated to this legend.

Emanuel Bowen (1694-1767) was a British engraver and print seller. He was most well-known for his atlases and county maps. He was widely acknowledged for his expertise and was appointed as mapmaker to both George II of England and Louis XV of France. His business was carried on by his son, Thomas Bowen. He also trained many apprentices, two of whom became prominent mapmakers, Thomas Kitchin and Herman Moll.